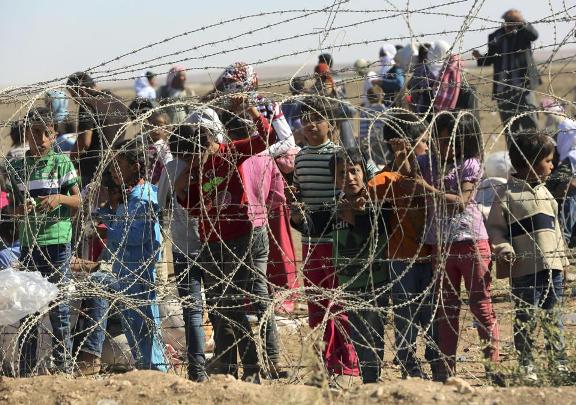 The United States and its Allies carried out air strikes against the Islamic State (IS) in Iraq, but not in Syria. There the self-proclaimed caliphate stormed through Kurdish villages, sending waves of at least 130,000 refugees into Turkey over the past two days. Carol Batchelor, the Turkey representative for the United Nations’ refugee agency, said in an interview with Reuters,

“I don’t think in the last three and a half years we have seen 100,000 cross in two days. So this is a bit of a measure of how this situation is unfolding and the very deep fear people have about the circumstances inside Syria and, for that matter, Iraq.”

Regarding the severity of the situation, Numan Kurtulmus, Turkey’s deputy prime minister laments,

Regarding the refugee situation in Turkey, BBC reports,

Before the latest influx, there were already more than one million Syrian refugees in Turkey. They have fled since the start of the uprising against Syrian President Bashar al-Assad three years ago. Some of the new arrivals are being sheltered in overcrowded schools, as Turkey struggles to cope with the influx.

At Open Eyes Mission, we continue to monitor the war in Syria and Iraq, and the refugee crisis in Lebanon, Turkey and neighboring countries, praying and seeking the Lord for direction and guidance as we consult with partner agencies and firm-up our plans for both short-term and long-term outreach.

I am a believer and follower of Christ, married, and have 3 wonderful kids. I am the founder and President of Open Eyes Mission (ministering as New Hope Global in the U.S.); a church planter among Muslims, Hindus, and other unreached people groups in the U.S.; and studying Doctor of Ministry at Trinity International University / Trinity Evangelical Divinity School. The Bible teaches that God is real, man is sinful, hell is real, and Jesus is our only hope of salvation. I believe these truths with all of my heart, and I hope to help others learn of them as well. "For God so loved the world, that he gave his only Son, that whoever believes in him should not perish but have eternal life." (John 3:16) May God give you grace and peace. Glem Melo www.glemmelo.com www.openeyesmission.org
View all posts by Glem Melo →
This entry was posted in Disaster Response, Prayer. Bookmark the permalink.

2 Responses to Pray for 130,000 new Kurdish refugees in Turkey